by Renata Andrade Peña via WWF-Brasil

The landscape is spectacular: it comes when you least expect it. The water is abundant: they are paths out of sight, surrounding every corner you look at. Hundreds of endangered species survive, including the jaguar, the giant anteater and the maned wolf. All this rich biodiversity has been protected since April 12, 1989, when 84,000 hectares formed the Grande Sertão Veredas National Park in Minas Gerais. Today, the Park is 30 years old and the Cerrado thanks.

“It was very important that this Conservation Unit was created in a region of expansion of the agricultural frontier, with intense occupation of agribusiness. This protected area is very important for the Cerrado biodiversity and also for water resources. There the river Carinhanha is born. When it flows into the São Francisco River, old Chico increases its volume by 20%, ”explains Kolbe Soares, Conservation Analyst at WWF-Brazil.

Elson Barbosa dos Santos, guide in the Park, highlights the importance of the Cerrado's water resources and medicinal species, which are protected. & #8220; Below the park region is the Urucuia aquifer, very important for maintaining the region's rivers like Carinhana, Itaguari and so on. Thanks to the Park are also protected various medicinal species of the Sertão & #8221 ;.

In 2004, the Grande Sertão Veredas Park was expanded to over 230,000 hectares, extending to the municipalities of Chapada Gaúcha, Formoso and Arinos in Minas Gerais and Cocos, Bahia. Thus, it is currently one of the largest parks in the Cerrado, ensuring, in addition to protecting hundreds of species of fauna and flora, the development of scientific research, environmental education, contact with nature, regional development on a sustainable basis and the preservation of traditional peoples, indigenous communities, their knowledge and culture.

The existence of this protected area is also an opportunity for sustainable development. "There is a huge potential for increasing ecotourism in the region for its beauty, the possibility of seeing the preserved Cerrado and also because of the culture of the people of the region and literature" says Kolbe Soares. “In the region, the Great Sertão Veredas Peoples Meeting is held annually in July. It is very important to conserve this cultural and social wealth ”, adds Soares.

& #8220; It is a great pleasure to talk about this UC because it is about the richness of biodiversity and also the history of the communities that still keep the cultural traditions of the people of the Sertão & #8221;

The Park was named after one of the most important Brazilian literary works, the novel “Grande Sertão: Veredas”, written in 1956 by João Guimarães Rosa. In the book, the Minas Gerais writer portrays with extreme sensitivity the regional reality. Guimarães Rosa is really right: “This is what this is about: you push back, but suddenly he comes around you again. Sertão is when least expected. ” 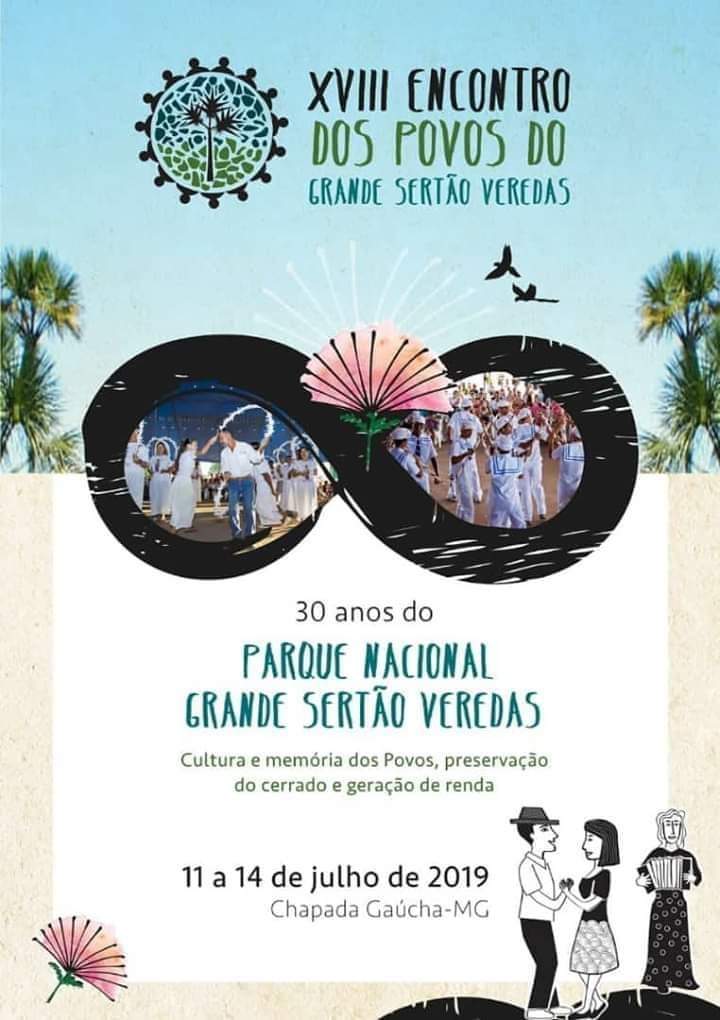 Grande Sertão Veredas National Park is located in the north / northwest of Minas Gerais and southwest Bahia, covering an area of 231,668 hectares. Since 2010, WWF-Brasil has been developing the Sertões Project in the region, focusing on improving the management of protected areas, enhancing agro-extractive production chains with good agricultural practices. Most recently they supported the Park and Mosaic in partnership with the Critical Ecosystem Partnership Fund (CEPF).

The work is carried out in partnership with the agro-extractive cooperatives and community associations of the Sertão Veredas-Peruaçu Mosaic, as well as other social and environmental non-governmental organizations and government agencies, such as the 12 prefectures of the region, as well as the Chico Mendes Institute for Biodiversity Conservation (ICMBio ) and Minas Gerais State Forest Institute.

Last year, the construction of a cerrado and backyard fruit processing unit in the Peruaçu Center and the creation of the Peruaçu Valley Family and Agro-Extractors Cooperative were one of the most important actions. In addition, support was provided for the implementation of the Rural Environmental Registry in the region, which resulted in the registration of approximately 10,000 properties. Another highlight was the study of the effectiveness analysis of 69 state protected areas in Minas Gerais.

WWF-Brasil executes the project Strengthening Integral Territorial Management in the Specially Protected Areas of the Sertão Veredas-Peruaçu Mosaic, which aims to integrate and strengthen the management of the specially protected areas of the Mosaic. This project is supported by the Critical Ecosystem Partnership Fund (CEPF, Critical Ecosystem Partnership Fund) and Brazilian International Institute of Education (IEB).

See the article in site from WWF-Brasil!

Service
The municipality of Chapada Gaucha, Minas Gerais, ICMBio, Funatura, the Rosa and Sertão Institute and partners organize a three-day program - from April 11 to 13 & #8211; to celebrate the birthday. There will be various activities with the local community and visitors such as planting seedlings, hiking trails, video viewing and discussions.