Text and image: National Campaign in Defense of the Cerrado

The podcast Guillotine premieres the special series “Cerrado of the Peoples: Knowledge and Biodiversity”, produced by Le Monde Diplomatique Brasil in partnership with Actionaid Brasil and the National Campaign in Defense of the Cerrado. The first episode, which features the theme “Women from the Cerrado”, is now available for free on several platforms. 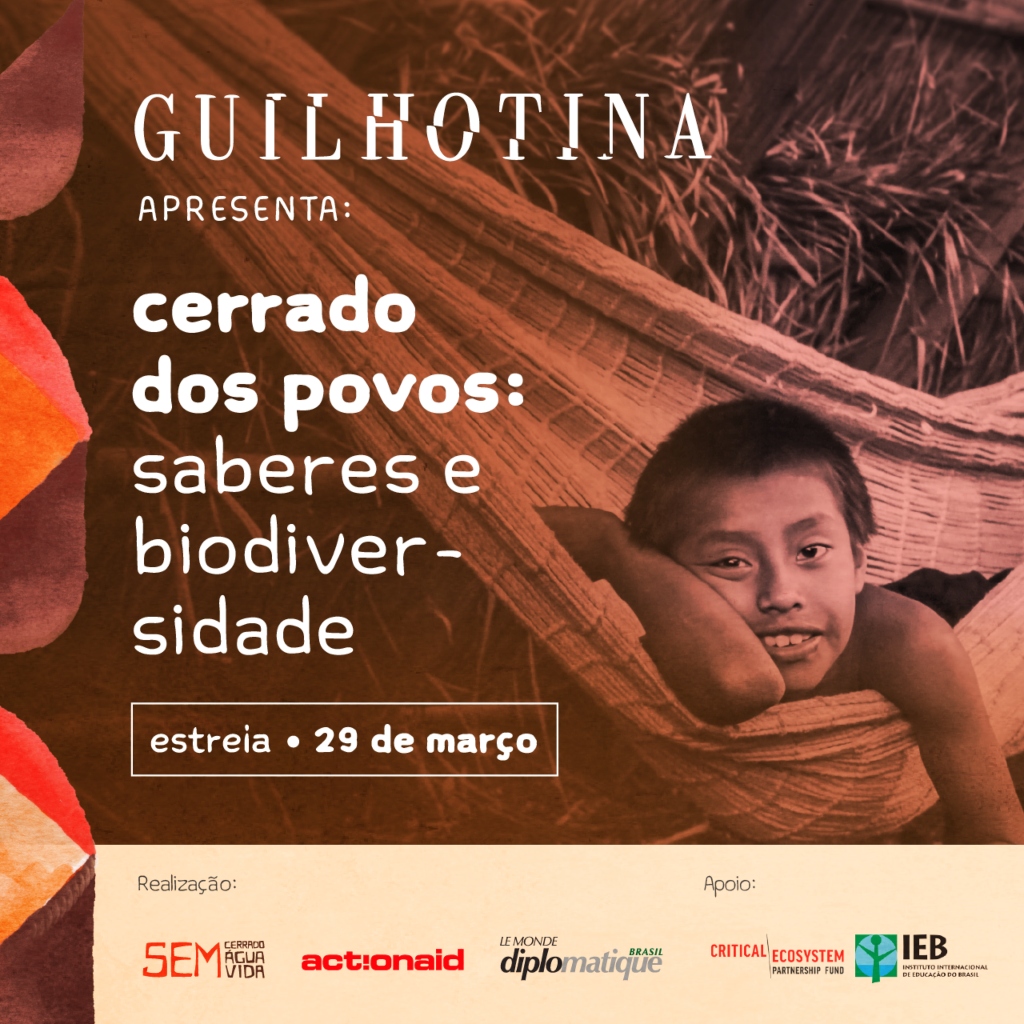 The opening episode has the participation of Celia Xakriabá, from the Xakriabá people and from the village Barreiro Preto, from Minas Gerais; Adalgisa Maria De Jesus, who lives in a Fundo e Fecho de Pasto community in Correntina, in western Bahia; and Miraci Pereira Silva, a farmer from the Roseli Nunes settlement, in Mirassol D'Oeste, in Mato Grosso.

The chat with the cerradeira women dealt with the pressures they face in their territories, such as the abusive use of water resources by large farms, contamination by pesticides, the struggles for gender equality in the countryside and the wisdom of the women of the Cerrado .

During the podcast, Dona Miraci explained that being a cerradeira woman is fighting to defend the territory where she lives. “To be a cerradeira is to have love for the land, for this biome, for plants, and to seek, in any way, to care for and defend the Cerrado. To be a cerradeira is to join the fight to defend the land, the waters, the native plants. It means not being silent, not crossing your arms and always trying to sensitize other people, other women, because the destruction of the Cerrado is the destruction of the life of its people", emphasizes the farmer.

The special “Cerrado of the Peoples: Knowledge and Biodiversity” is supported by the Project “Networking and social participation for the conservation of the Cerrado”, carried out by ActionAid and Campaign in Defense of the Cerrado with the support of Critical Ecosystem Partnership Fund (CEPF) and Brazilian International Institute of Education (IEB).

Transmission is part of the series of lives '' Chats: Knowledge of the peoples of the Cerrado and Biodiversity ''

On May 22, the date that marks International Biodiversity Day, the National Campaign in Defense of the Cerrado starts the series of virtual broadcasts '' Chats: Knowledge of the Cerrado Peoples and Biodiversity '', carried out in partnership with the Observatory of the Ruralists. The debut episode will be broadcast on 4 PM and will present the theme ''The strength of the women of the Cerrado: roots and breakers'', with the participation of representatives of entities and movements that integrate different fronts of the struggle for rights in Cerrado territories. 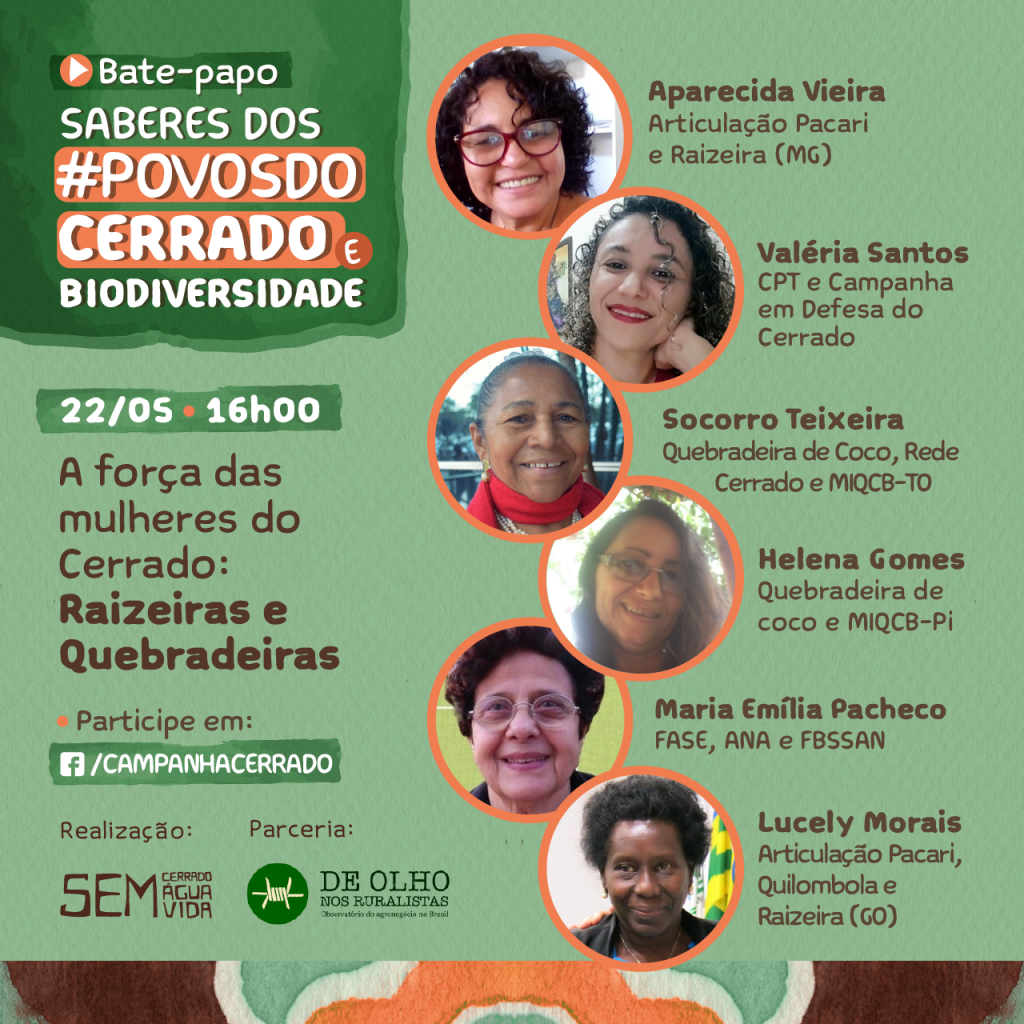 The first episode of the series will shed light on the ways of life and the forms of resistance of women who break coconut babassu and the roots of the Cerrado. Aparecida Vieira and the quilombola Lucely Morais, masters in Traditional Knowledge from the Federal University of Minas Gerais (UFMG) and University of Brasília (UnB), respectively, will represent the roots in the dialogue wheel. Both are part of the coordination of Articulação Pacari, a socio-environmental network formed by community organizations that practice traditional medicine through the sustainable use of the Cerrado's biodiversity.

The team of coco-babaçu breakers will have the participation of Socorro Teixeira, from Tocantins, president of Rede Cerrado and part of the Coordination of the Interstate Movement of Coco-babaçu Breakers (MIQCB), and Helena Gomes, from Piauí, vice coordinator of the MIQCB. Maria Emília Pacheco, from FASE and the National Articulation of Agroecology (ANA), will join the chat as a debater along with Valéria Santos, from the Pastoral Land Commission (CPT) and the executive coordination of the National Campaign in Defense of the Cerrado, which will facilitate the dialog wheel.

Guardians and guardians of traditional knowledge

The widespread use of the coconut babassu palm by the breakers from Maranhão to Mato Grosso (passing through Pará, Piauí, Tocantins and reaching Chiquitania in Bolivia) depends on a set of knowledge passed on among women over many generations. Through these multiple uses, & #8220; mother-palm & #8221 ;, as the breakers say, brings food and sustenance to thousands of families in our Cerrado.

Despite this, breakers often have to fight against large landowners who want to cut down palm trees and prevent them from accessing babassu trees. All of this led them to organize themselves in the MIQCB to achieve & #8220; release the coconut & #8221; and become stronger in production and marketing.

Another traditional knowledge of the peoples of the Cerrado is the use of medicinal plants that make up the & #8220; Pharmacopoeia Popular do Cerrado & #8221 ;. The roots and roots are recognized in their communities by the practice of different healing trades from the application of varieties of plants, roots, fruits, clays and their preparations. "The criminalization and depreciation of the biocultural importance of these practices led the roots to organize themselves in the Pacari Articulation and to launch the Biocultural Protocol of Raizeiras do Cerrado, seeking to defend their right to practice traditional medicine," says Valéria.

In addition, the lack of recognition of the importance of their practices for the cultural and biological diversity of the Cerrado was not enough, the breakers and the rootstocks have still faced the threat of a new type of theft and encircling: the appropriation by companies of the genetic heritage of which they are guardians .

The series of chats '' Knowledge of the Peoples of the Cerrado and Biodiversity '' will transmit dialogues focused on the populations that promote the conservation of the Cerrado's biodiversity: indigenous, quilombolas and the traditional peoples and communities of the region. With two episodes scheduled per month, the series will run until August.

In this moment of pandemic due to the coronavirus, Aparecida Vieira highlights the importance of the initiative to make the work of women in rural areas visible in the territories. '' We need to announce that the work of women guardians of traditional knowledge has not been interrupted in this moment in which we live. On the contrary, it is fundamental work for the health of communities '', highlights the root girl.

CEPF Cerrado and the National Campaign in Defense of the Cerrado

The National Campaign in Defense of the Cerrado visits Traditional Communities and Peoples in the Mirador-Tables Corridor, located in the states of Maranhão, Piauí and Tocantins, through the Project ''Network articulation and social participation for the conservation of the Cerrado' ', which is supported by the Critical Ecosystem Partnership Fund (CEPF) and the International Institute of Education of Brazil (IEB), with the coordination of the ActionAid Brasil. With a focus on enhancing the ways of life of Traditional Peoples and Communities and in strengthening social participation actions and the fight for territorial rights of these groups, the research seeks to subsidize the performance of the Campaign, its member organizations and the populations living in the Cerrado.

Virtual debate '' The strength of the women of the Cerrado: roots and breakers ''

Realization: National Campaign in Defense of the Cerrado

by Bruno Santiago, Communication Advisor of the National Campaign in Defense of the Cerrado

Between September and October 2019, the National Campaign in Defense of the Cerrado visits Traditional Communities and Peoples of the Mirador-Tables Corridor, located in the states of Maranhão, Piauí and Tocantins. The reason for roaming is the realization of field research from the project ''Network articulation and social participation for the conservation of the Cerrado' ', which is supported by the Critical Ecosystem Partnership Fund (CEPF) and the International Institute of Education of Brazil (IEB), with the coordination of the ActionAid Brasil.

Focusing on valuing the lifestyles of Traditional Peoples and Communities and in strengthening the actions of social participation and fight for territorial rights of these groups, the research seeks to support the campaign, its member organizations and populations living in the Brazilian savannah.

Given the adverse socio-environmental conjuncture experienced by the peoples of the earth, forests and waters in any biome of our country, such research becomes even more relevant. That's what explains Gerardo Cerdas Vega, Policy and Program analyst at ActionAid Brazil. "We live in a time when the Cerrado Peoples face widespread violence against their territorial rights and lifestyles, which puts their survival at risk," he emphasizes.

From the identification of practices, knowledge and technologies of the visited communities, the research intends to show the relation of the action of these populations with the protection of agrobiodiversity of the territories. '' Any strategy for the defense and conservation of the biome must contemplate the permanence of these guardians. Undoubtedly, their contribution is significant and the research intends to present these benefits, 'says Gerardo.

Another thematic axis of the research is the guarantee of rights tofrom spaces of social participation. The project aims to detect the relevant institutional spaces for community advocacy actions, covering topics such as food and nutrition sovereignty, rural education and social inclusion policies.

In addition to institutional participation spaces, the research will also look at community spaces of organization. '' We note that in the national context spaces for social participation are not always accessible or democratic, especially for traditional peoples and communities. Thus, the project also aims to guarantee subsidies so that communities and peoples can organize and fight for their rights to participate, '' says Vega.

One of the communities that received the Campaign field research team was Brejo do Miguel, in the municipality of Gilbués, south of the state of Piauí, a traditional riparian riverine territory. Last week the Pastoral Land Commission (CPT) published public note denouncing the invasion of land grabbers in an area of grass in the stump and loose animals that has been used for about three generations by the community. The fence that had been built by the families of the region was destroyed by seven jagunços with the use of chainsaws.

Unfortunately this kind of conflict is not new to Cerrado and in the Brazilian field. According to CPT data, 118,080 families were involved in land conflicts in 2018, a period that also records that this type of occurrence increased by 3.9% compared to 2017, from 1,431 occurrences to 1,489.

In this context of conflicts, threats and challenges for the resisting close populations, the project's field research & #8220; Network articulation and social participation for the conservation of the Cerrado '' Its objective is to contribute with the availability of information, report and booklet with the fruits of these experiences and learning in the territories.