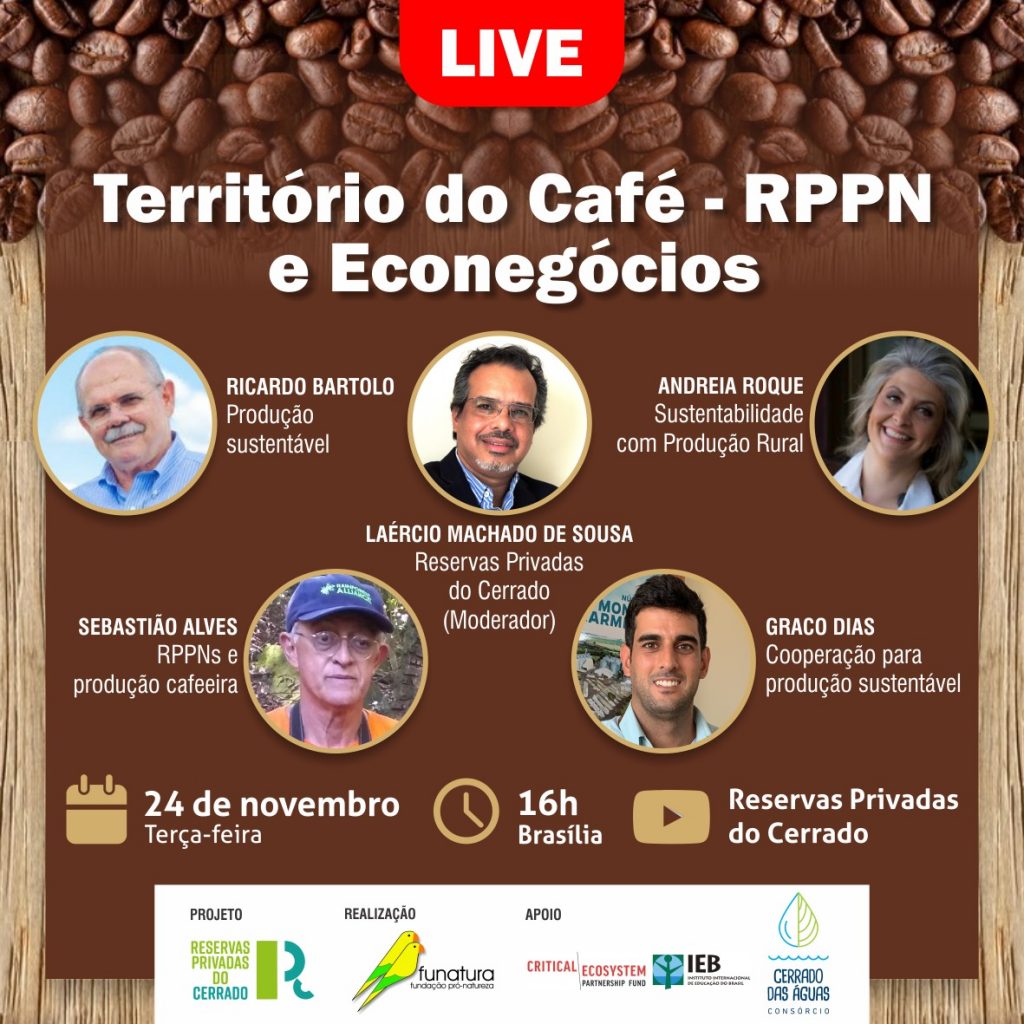 It happens on the day November 24, at 4 pm (Brasília time), the live & #8220; Café Territory & #8211; RPPN and Econegócios & #8221 ;. Organized by the project Private Cerrado Reserves, supported by the Partnership Fund for Critical Ecosystems and the International Education Institute of Brazil, the event highlights the importance of sustainable production of one of the great commodities of Brazilian production, coffee. A product consumed worldwide and which in recent years has conquered an increasingly demanding public, which seeks quality and which values brands that are concerned with minimizing environmental impacts. The coffee segment, in turn, has been working to meet these new demands and market opportunities, based on the principles of sustainability.

On the occasion, the participants speakers:

& #8211; Ricardo Bartholo: Coffee producer in the Patrocínio region - MG. Participant in the Conscious Producer Investment Program of the Águas do Cerrado Consortium (CCA), he was invited to talk about his coffee production with the precepts of organic and sustainable production.

& #8211; Graco Dias: Environmental Engineer, advisor to the Consortium of Waters (CCA), works in the Social and Environmental Responsibility Department of Cooxupé. Graco Dias was invited to speak about the CCA and Cooxupé's participation in cooperation with coffee producers in relation to sustainable production.

& #8211; Andreia Roque: Expert in Public Policies and Rural Development. Operates in strategic projects aimed at Rural Tourism, Sustainability and Environmental Responsibility in RPPNs. Agronomist, Master and PhD student in Health and Environment UNIT. Andreia Roque will deal with cases of Sustainability with Rural Production (coffee, among others).

& #8211; Laércio Machado de Sousa: Business Administrator, Consultant at Jataí Capital e Conservação. He was president of REPAMS (Associação de RPPNs do MS) and CNRPPN. He is currently the coordinator of the Cerrado Private Reserves Project, FUNATURA - IEB - CEPF. Laércio will be the moderator of the event.

Make a note in the calendar

The live will be broadcast on November 24, at 4 pm (Brasília time) on the YouTube channel do Cerrado Private Reserves (activate the reminder).

Private Cerrado Reserves & #8211; It is an initiative that aims to promote the conservation of natural resources by encouraging the creation, expansion and effective management of Private Natural Heritage Reserves (RPPNs) in one of the most threatened biomes in Brazil. The project is carried out by the Pro-Nature Foundation (Funatura) and has resources from the Partnership Fund for Critical Ecosystems (CEPF, in the acronym in English for Critical Ecosystem Partnership Fund) and support from the International Education Institute of Brazil (IEB). More information can be obtained on the project's social networks (@reservasdocerrado) or on the website http://reservasprivadasdocerrado.com.br.

The Critical Ecosystem Partnership Fund (CEPF) is a joint initiative of the French Development Agency, Conservation International, European Union, the Global Environment Facility, the Government of Japan, and the World Bank. A fundamental goal is to ensure that civil society is involved in the conservation of biodiversity

The IEB (International Education Institute of Brazil) is a Brazilian association with no economic ends and stands out on the national scene for dedicating itself to training and qualifying people and strengthening organizations in various aspects and themes related to the environment, development and sustainability.

About the Cerrado Water Consortium
Created in 2014, in Sponsorship & #8211; MG, the Cerrado das Águas Consortium aims to raise awareness among producers in the region about the importance of their environmental assets by diagnosing and investing in them, ensuring their long-term preservation. In 2019, the pilot project received from the Partnership Fund for Critical Ecosystems (CEPF) the amount of US$400 thousand to implement the program that will initially promote the investment and protection of natural ecosystems found in more than 100 properties throughout the basin of Córrego Feio. The sum is the largest grant ever awarded by CEPF, which counts on demanding donors such as the French Development Agency (AFD), the European Union, the Global Environment Facility (GEF), the Government of Japan and the World Bank.
______________
Press Contact
STUDIODVÖS | Agribusiness specialists
Polliana Dias
Marketing & Communication Executive | Communication core
C. +55. (34) .9.8818-7718
T. +55. (34). 3832.6619
and. polliana@dvos.com.br