The project Union of Pro-Cerrado COMDEMAS, which is run by Neotropic Foundation of Brazil and has the support of Critical Ecosystem Partnership Fund (CEPF, Critical Ecosystem Partnership Fund) and International Institute of Education of Brazil (IEB), Its objective is to strengthen the Municipal Environment Councils (COMDEMAs) to support local decisions that contribute to the conservation of the Cerrado and to the achievement of global biodiversity conservation goals. 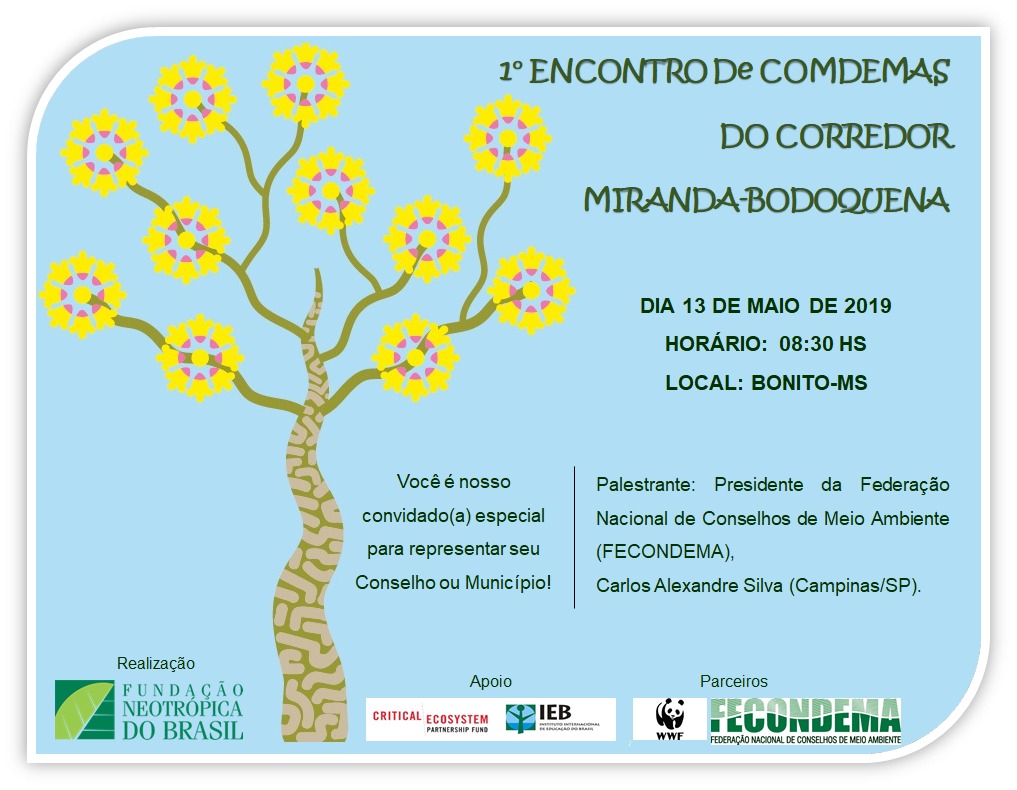 In order to empower the council on conservation issues to propose public policies for the protection and conservation of the Cerrado, Neotropic Foundation of Brazil in partnership with WWF-Brazil and Mamede Institute, will promote next Monday (13)at 8.30 am '1st Meeting of Miranda-Bodoquena Corridor COMDEMAS' at Sebrae, located on Cel. Pilad Rebua, 2480, in Bonito, MS. Interim Executive Superintendent of the Neotropic Foundation of Brazil, Rodolfo Portela Souza, reports that “the intention is to promote the strengthened and integrated action of the representatives of the Municipal Environment Councils of the municipalities inserted in the Miranda-Serra da Bodoquena Corridor; so that they can contribute to the fulfillment of global goals for the conservation of the Cerrado biome ”. During the event, Carlos Alexandre Silva, president of National Federation of Environment Councils (FECONDEMA), will give the lecture 'Importance of Environment Councils in Municipal Environmental Management - Environment Fund as a Resource for Effective Public Policies - Atlantic Forest Municipal Plan as a Guideline for Sustainability of Local Biomes'.

The project activities Union of Pro-Cerrado COMDEMAS started in 2018. Since then, 72 people have been mobilized by actions in the municipalities that are part of the Miranda-Bodoquena Corridor and have an incidence on biomes Cerrado, Pantanal and Atlantic Forest in Mato Grosso do Sul. The first action organized by (COMDEMAS) was to make a diagnosis on the legal status of the councils in the municipalities covered by the project. Rodolfo Portela Souza reports that these surveys were conducted through the promotion of participatory methodologies, as well as the training of counselors, aiming to level the knowledge based on positive actions for the conservation and management of the Cerrado in the Project's region of operation. “The result is being positive. During this period we were able to train and strengthen the councils that were already active, revive some that were inactive and start the mobilization process for the creation of these councils in municipalities that do not have this collective ”, he explains.

See the full article on site of the Journal Now MS!

For more information, contact the Neotropic Foundation of Brazil!