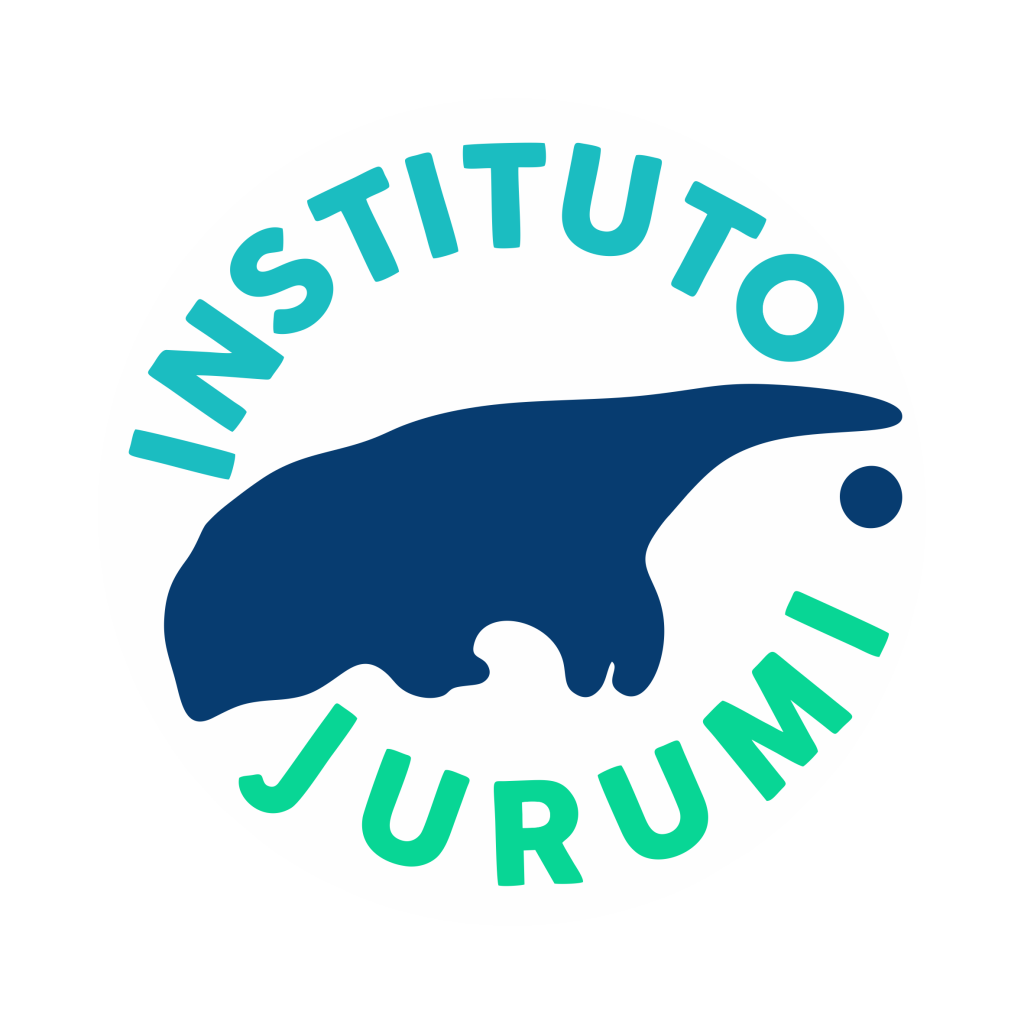 Today, on the National Day of the Cerrado (9/11), we will meet a rare natural plant from the Jequitinhonha Valley region, Minas Gerais, which is critically endangered due to the destruction of its habitat by mining and by illegal and predatory collection for trade in collectors. It belongs to the botanical family Cactaceae, the cactus with the scientific name of Uebelmannia buiningii, Ita crown, is found in an area of about 18.81 hectares located in the municipality of Itamarandiba. This area is in transition between the biomes of Atlantic Forest and the Cerrado and where is onethat of the few conservation units in the region, the Serra Negra State Park - PESN. The site is considered a key area for biodiversity or Key Biodiversity Area (KBA), full of endemic species. KBAs are places that “contribute significantly to the worldwide persistence of biodiversity”, for example, by supporting the conservation of threatened species and species that have severely restricted global distributions.

The plant has been studied since 2012 by researchers from the Cerrado Biodiversity Assessment and Research and Conservation Center & #8211; CBC, from the Chico Mendes Institute for Conservation and Biodiversity (ICMBio), which go to the field in search of knowledge about their populations, a more detailed understanding of the characteristics of their habitats and factors that threaten their survival, which are disclosed in scientific works and help to guide the paths to be followed for the management of their populations in nature.

The project & #8220; Ecology & Recovery U. buiningii & #8221; since 2019 with financial support from International Education Institute of Brazil, through the Partnership Fund for Critical Ecosystems (CEPF Cerrado) and with the management of Jurumi Institute for Nature Conservation in partnership with Embrapa-Cenargen and Serra Negra State Park. The biologist and coordinator of the Project, Suelma Ribeiro explains that: “the main focus, without a doubt, is to guarantee the maintenance of the cactus in nature in the long term”.

The plant is critically endangered, according to the national and international list of species of flora threatened with extinction, due to the destruction of their habitat and illegal removal of their individuals. However, other threats were identified with the studies carried out in 2019. According to biologist Washington Oliveira, a member of the team: “the research carried out last year indicated that the invasive exotic plant known as fat grass (Melinis minutiflora) was found in all areas where the cactus occurs and negatively affects its abundance ”.

The cactus that lives exclusively in a range between 900 and 1350 m in altitude, is pollinated by bees, measures about 6 cm in height and lives in association with other shrubs and rocks, especially under others endemic species bromeliads and velózias, also known as canela-de-ema. This association favors a greater abundance of the cactus, attenuating the excessive solar radiation through shading, which leaves the environment more humid, reducing the negative effects of the high temperature of the place, making these appropriate places for seed germination. According to Suelma Ribeiro, “these environments function as a micro ecosystem that must be protected to guarantee the maintenance of individuals of Uebelmannia buiningii.

However, most cactus populations live outside the PESN, with four small populations located on private properties, which requires urgent protection and awareness-raising actions. In this sense, the project also works with environmental education initiatives already developed by the Park's team, stimulating actions that sensitize children and young people from local communities. PESN manager Wanderlei Pimenta comments that: “the redefinition of the Park's limits, the creation of private reserves of natural heritage & #8211; RPPN and the intensification of environmental education actions in the region are fundamental for the protection of the plant and the unit's ecosystems ”.

The management of cactus populations in the rocky fields of Serra Negra requires the adoption of adptive management strategies that favor the reduction of impacts on the few individuals left in nature. Thus, it is essential to ensure the maintenance of ecological interactions and the protection of their habitats. According to Suelma Ribeiro, this approach will also serve to benefit other endangered species that occur in the territory and explains: “the implementation of these management strategies will be the next step to be taken by the project, but which will require the strengthening of current partnerships as well as its expansion to save this cactus from extinction together ”.

More information can be accessed at the following websites:

The Cerrado it lives a critical moment because, currently, it is the most deforested biome in Brazil. In six months, from October / 2018 to March / 2019, it lost 47,700 hectares, almost double the area suppressed in the Amazon, for example, according to data from MapBiomas.

Of the more than 2 million square kilometers of original Cerrado vegetation, less than half remains. So the Mosaic Sertão Veredas Peruaçu, with its 63% percentage of conserved natural vegetation, represents a fundamental area to guarantee the integrity and conservation of the remaining Cerrado areas: practically an oasis in Brazil.

WWF-Brasil carried out the project Strengthening Integral Territorial Management in the Specially Protected Areas of the Sertão Veredas-Peruaçu Mosaic, which aimed to act in the integration and strengthening of the management of the Mosaic's specially protected areas. This project was supported by the Critical Ecosystem Partnership Fund (CEPF, Critical Ecosystem Partnership Fund) and Brazilian International Institute of Education (IEB).

On the 19th of March, in Belo Horizonte, the Symposium “Challenges in the conservation of rare plants. The case of species of Dimorphandra”. This symposium is one of the actions of the National Action Plan for the conservation of the faveiro-de-wilson, a species of rare and endemic tree from Minas Gerais, threatened with extinction.

The symposium is also an integral part of the Project “Management and Protection of the faveiro-de-Wilson (Dimorphandra wilsonii) ", which is supported by Partnership Fund for Critical Ecosystems and International Institute of Education of Brazil. At the event, specialists and collaborators working with this species, as well as with another equally rare tree species in the region, the faveiro-da-mata, will show the latest advances in research and conservation of these species, as well as discuss the ways forward.

The project “Handling and Protection of the faveiro-de-wilson” is executed by Society of Friends of the Belo Horizonte Zoo-Botanical Foundation and started in November 2017 and has several actions in progress, including meetings, training and visits to areas of occurrence of the species, acting in an extension of 5,215 km², where are the 18 municipalities where the faveiro occurs. know more about the project's actions!

Check out the schedule! 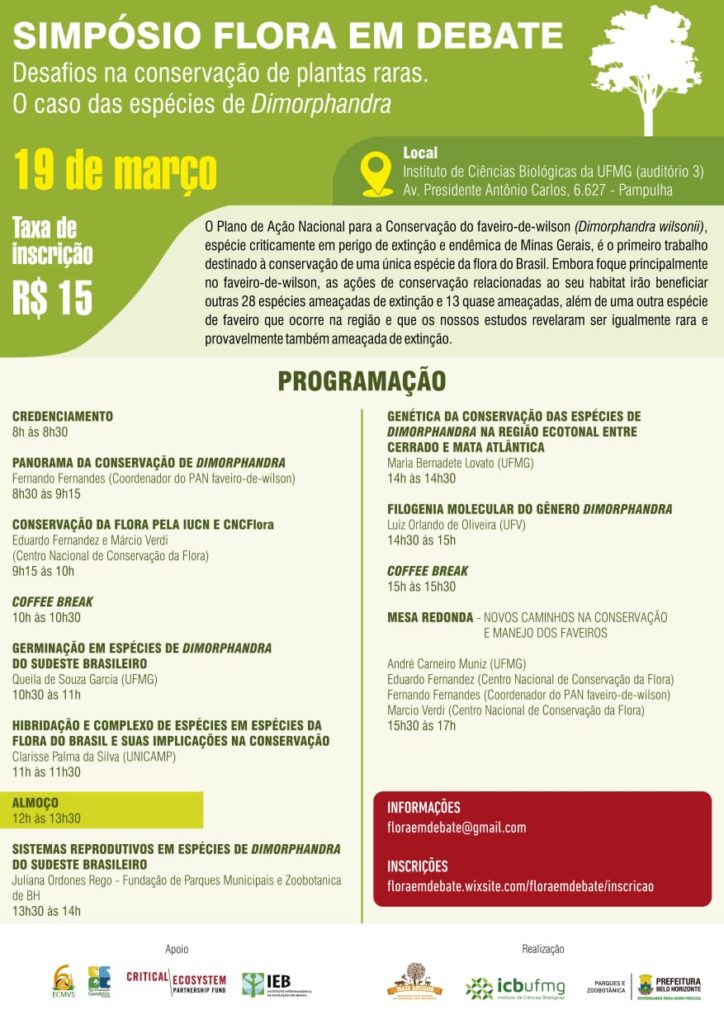 The weevil (Sporophila maximiliani) is one of the most rare and endangered and currently free-living populations in the country are unknown. The last record in the wild occurred at the end of 2014, where a small population was located in the interior of the state of Mato Grosso, which has not been seen since. In the rest of the country, the boll weevil has been extinct in practically its entire area of occurrence.

THE reintroduction of butt couples began in November 2018 in Januária in the north of Minas, an area that covers the Sertão Veredas-Peruaçu Corridor. Since then, 34 bollards have been successfully reintroduced into an area of Private Reserve of Natural Heritage (RPPN) and has been monitored by the project team Reintroduction of bicudo in key areas for the conservation of the Cerrado. To better understand the steps involving the reintroduction of boll weevils, the program People's Land accompanied the release of a couple in the project area. Click here in the post and check out the full program:

In addition to reintroduction, the project also has the important role of generating scientific knowledge about the speciesand, therefore, presented some of the results at the last Brazilian Ornithology Congress that was held in July this year in Vila Velha (ES). The project is supported by Critical Ecosystem Partnership Fund (CEPF Cerrado) and International Institute of Education of Brazil and is executed by Ariramba Institute of Nature Conservation with the support of several professionals from different institutions and universities in Brazil.

Get to know more projects supported by CEPF Cerrado and IEB in our site.